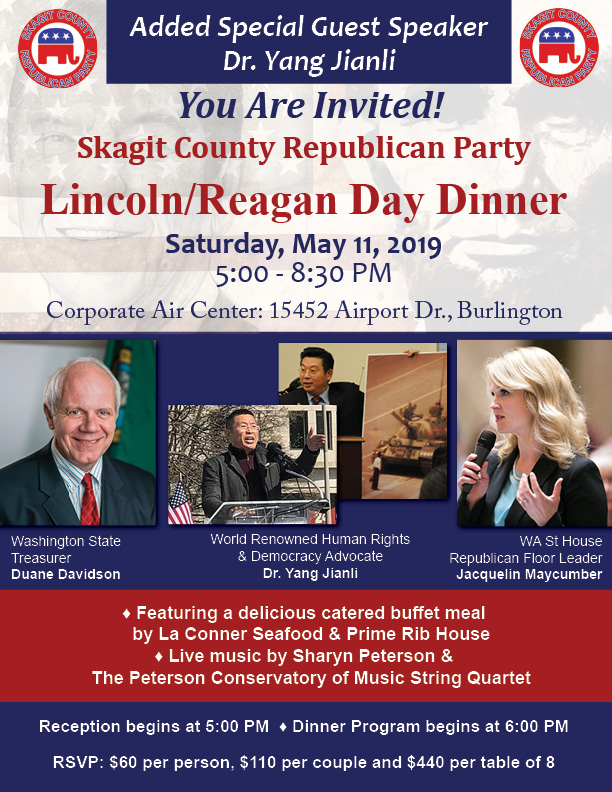 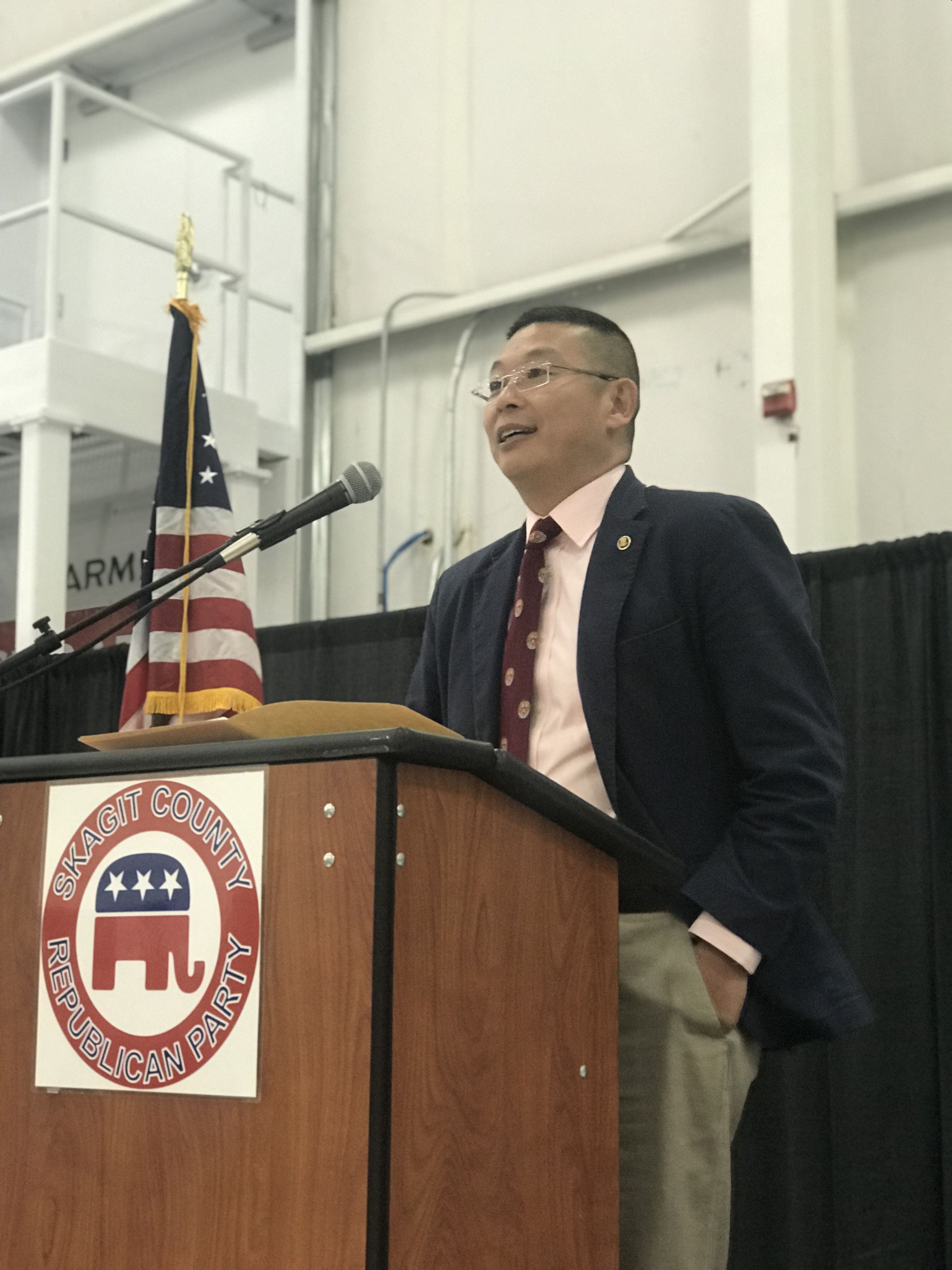 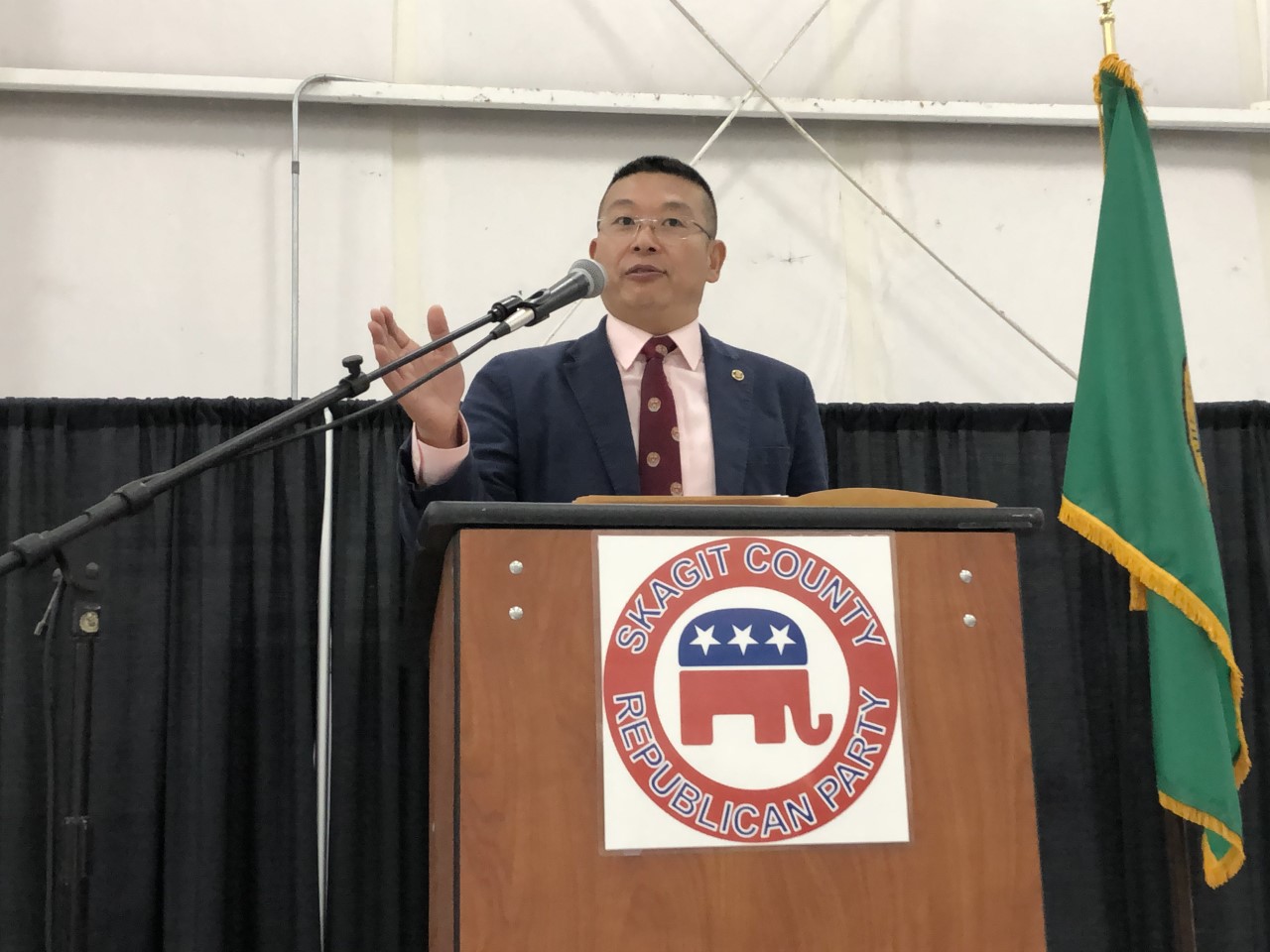 To Make America Great Again: Lincoln and Reagan Standing as Shining Examples for President Trump and American People to Follow

Good evening. Thank you Jacquelin for your kind introduction. What an honor to be in the company of you and Mr. Davidson speaking at this Lincoln/Reagan Dinner. Lincoln and Reagan are definitely among the American presidents I admire most.  They are both liberators.

On June 12, 1987, President Reagan stood just 100 yards away from the Berlin Wall and uttered some of the most unforgettable words of his presidency: “Mr. Gorbachev, tear down this wall.”  Berlin Wall stood as a vivid symbol of the battle between communism and democracy that divided Berlin, Germany and the entire European continent. His vision and guts helped the free world win the Cold War and defeated communism in Europe.

Few of you in this room know what it feels like to be blessed with freedom after living under the oppression of socialism and communism.  When the Venezuelan military vehicles drove into a crowd of civilians about two weeks ago, I was reminded of the horrors of the Chinese tanks running over students in the Tiananmen Square Massacre whose 30th anniversary we will commemorate next month.  The dictators have done in Venezuela all of the similar things that the dictators have done in China. Be it socialism with Chinese characteristics or Venezuelan characteristics.  The results have been catastrophic. I have a first-hand understanding of these catastrophes.

I was born three years before the Cultural Revolution. At an early age, the unspeakable sufferings that most families had at the hands of the communist dictatorship, including mine, made me disenchanted with the Chinese Communist Party (the CCP).  However, I was enticed into joining the party with the idea of reforming it from within.  This all changed when I returned from my Ph.D. studies in the U.S., to join thousands of my fellow students in Beijing as Chinese army tanks rolled across Tiananmen Square on the morning of June 4, 1989.  Luckier than most of my fellow students, I narrowly escaped the massacre and the ensuing arrests and returned to the United States. While I continued my studies, I immersed myself in the work advancing human rights and democracy in China. In the Party’s eyes, the former young communist star had now become a public enemy. I became persona non grata, a traitor, prohibited from entering the country.  But in the spring of 2002, I decided to defy the ban.  In China’s industrial northeast, thousands of workers were taking to the streets, protesting the destitution brought on by government exploiting policies. Sensing an opportunity to forge bonds with grassroots activists, I entered China using a borrowed passport and forged ID card.

For two weeks I met with exploited construction laborers, expropriated farmers, and striking workers, documenting their grievances and the condition of their lives and helping them with non-violent struggle strategies. But as I attempted to slip out of China across the Burmese border, my fake ID was spotted and I found myself in the hands of the security police.

I was detained for five years.  Much of those years I spent in solitary confinement.  My mental condition deteriorated beneath endless isolation, repeated interrogations and ongoing psychological and physical torture. I prayed and prayed to God for understanding of his purpose for me and for spiritual strength to sustain myself.  I resorted to composing poems in my head and committing them to memory as a means of maintaining my sanity. Nearing a breakdown, I grasped onto my innermost resources of belief, imagination, and will to fend off insanity and find a reason to live.  “Am I wrong?” I asked myself with a tinge of regret. But I repeated a thought experiment: imagining of myself taking a copy of the Universal Declaration of Human Rights, arbitrarily choosing anyone on the Chinese streets, showing the document, asking them with the language they understand whether they want the rights listed there. Would anybody say No?  Of course, Not. Nobody wants to be a slave. In this regard, the Chinese people are no different than any other people in the world. The thirst for freedom and dignity is indeed universal. I drew strength and inspiration from this first order of fact.

I also thought of my fallen brothers and sisters in Tiananmen Square. I reassured myself that freedom is not free. Freedom must be earned. It was not free for those who paid with their lives. It is certainly not free for those of us who, while still blessed with our lives, have yet to complete the mission for which these brave students gave their lives and their freedom. I must not give up!

To make a long story short, in 2007, thanks to the overwhelming support from America and the international community, I was freed, returned to the US and recommitted myself to the hard work to advance human rights and democracy in China.

We were asked by American friends after Tiananmen: “Yes, we believe in the universality of democracy and freedom, but other than that, why should we care about whether, and how fast, China becomes democratic?”

My answer was simple. “If China is allowed to continue its path of economic and military buildup under a one-party dictatorship, it will pose a serious threat to the security and economic interest of America and even its very democratic way of life.”

Unfortunately, what I said nearly 30 years ago has become a reality today.

China has been waging economic war against industrial democracies ever since America allowed it a normal trade status. And now China has emerged as the greatest economic and national security threat the United States has ever faced. America is running the largest trade deficit with China, $350 billion annually. We must not forget China’s human rights deficit has contributed largely to America’s trade deficit with China. Low human rights is a big advantage of China in trading with free market economies just like the slavery system is an advantage of the South in trading with the North before the Civil War.

China is serving as a model for dictators and juntas. In fact, it is already a model and a leading supporter of these regimes. Pick a dictator anywhere on the globe—from North Korea to Venezuela, from Cuba to Iran—and you’ll almost certainly find that the CCP is supporting it today.

In the United States today, the CCP takes advantage of our freedom and democracy to solidify its position at home. It, or its surrogates, has wide access to our universities, think tanks, and media through which they can advance their opinions and rationalize their actions.

Make no mistake, the expansion of China’s military power is also a significant and alarming development. Throughout  past decades, China’s defense budget has increased much faster than its GDP. The Chinese People’s Liberation Army is acquiring more than enough power to intimidate surrounding East Asian countries, some of them America’s allies.

President Trump’s raising tariffs on China’s import yesterday demonstrates the severity of these threats. Indeed, President Trump has been making the long-awaited right shift in China policy, beginning to take China as what it is.

But I would like to remind tonight: The trade deal under negotiation is not something between two similar systems seeking closer ties. Rather, this is a fundamental clash between two radically different economic models which are deeply rooted in differing and even conflicting values and beliefs. Put it simply: ultimately it is not about money but value. The United States was built on the cornerstone of values. From Mayflower Convention to Declaration of Independence. From the Constituent Assembly to Lincoln’s Gettysburg speech to Reagan’s “Tear down this wall”, the United States of America was guided by ideals and faith every step of the way.  The idealistic qualities have not only ensured stability and prosperity at the national level but also inspired the creativity and potential of Americans at the individual level. If the idealism and belief in American values were taken away, the United States would lose its soul, the fundamental driving force that made America great in the first place.

The United States faced many crises in history: the Civil War, World War II, the Cold War,  9/11 terrorist attacks, you name it. History has witnessed that the United States has turned each crisis into opportunities for tremendous national growth. Why do crises become a driving force for growth? What is America’ secret?

I think the secret lies in the democratic idealism and values that the U.S. holds dear.

What Trump is facing now is certainly quite different from what Lincoln faced then.  However, if I draw a perhaps not-perfect parallel between Lincoln’s "North-South" dynamic and Trump’s "America-China" dynamic, my message is quite telling.

Here is an interesting case study. In the early 19th century, the slavery system in the south was on the decline. However, when the cotton plantation started to boom, there was a surge in slave trafficking. In 30 years’ time, the South accumulated tremendous wealth thanks to the free cotton market in the North and extremely low labor cost (slavery, high human rights deficit if you will) in the South. As a result, the slave owners in the South developed “systematic confidence” toward slavery.

In the early 1990s, the disintegration of Soviet Union and the Tiananmen massacre nearly led to the collapse of Communist ideology. The whole world optimistically assumed the (communist) history would “end”. In about 30 years’ time, China rapidly grew its economy by largely taking advantage of its human rights deficit and America’s free market. The CCP not only stabilized its rule, it has become increasingly aggressive in its efforts to be the global hegemonic power.

Lincoln had a choice: close the Northern market to the South without caring about its Slavery system or end the Slavery system itself.  We all know what Lincoln chose.

When dealing with an authoritarian regime like China, will President Trump follow steps of President Lincoln with the South and President Reagan with the Soviet Union?

To conclude, I want to share a true story with you.  A young prisoner in the same prison I was kept received a death penalty for a crime of stealing a couple of motorcycles.  The night before his execution, he said to his inmates: “If there is next life, I will make sure I want to be born again. I will refuse to be born again if I see the Chinese Communist flag. I will agree if I see the Stars and Stripes.”

Dear friends, this is where the greatness of America lies. To make America great again, for President Trump and the American people, Abraham Lincoln and Donald Trump are shining examples to follow.