Citizen Power Initiatives for China (CPIFC) will hold a press conference in its Washington office on Tuesday, January 7, 2020, from 11:00am to 12:00 pm, to launch CHENG Ganyuan's book, Secrets of the CCP's United Front Department published by Citizen Press run by CPIFC. 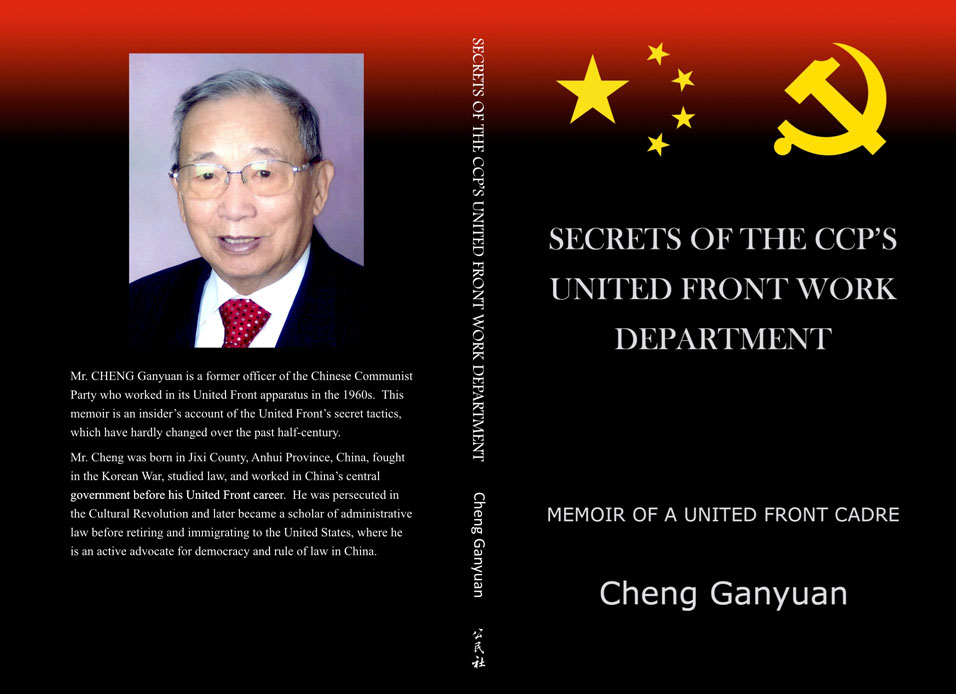 Secrets of the CCP's United Front Department is an insider's account of the Chinese Communist Party's United Front system and its secret tactics. The author is Mr. CHENG Ganyuan, a legal scholar and former Chinese Communist Party officer, who worked in its United Front apparatus in the 1960s. Mr. Cheng was a Chinese soldier in the Korean War. He studied law and worked in China's central government before his United Front career. He was persecuted in the Cultural Revolution and later became a scholar of administrative law before retiring and immigrating to the US, where he is an active advocate for democracy and rule of law in China. His main responsibility, while he was working in the CCP's United Front Department, involved the agency's efforts vis a vis minor political parties, he also became familiar with the Department's dealings with business community and various religious groups. He was involved with such sensitive work as receiving the Republic of China's former acting president Li Zongren and China's last emperor Aisin Gioro Puyi.

This book reveals the true nature of the "United Front" by telling real stories concerning real people. Readers may be surprised to find that the CCP's United Front tactics have hardly changed over the past half-century, and the farces described in this book are still being constantly replayed in China, Hong Kong, Taiwan, and overseas Chinese communities, albeit on a larger scale. This book is the only memoir yet written by a former CCP United Front cadre about the Department. It is highly valuable as a political reference and historical record.

Mr. CHENG Gananyuan, who resides in California, just underwent a surgery and cannot make it to the press conference in person.  He will join in online remotely from California and interact with participants and press.

Light lunch will be served after the conference.

This event will be live streamed through Citizen Power official TV channel on Youtube: https://www.youtube.com/channel/UC2Gz65rU_l-9UcHAV9MsVpg

Lieutenant Colonel (retired) Mark Stokes is Executive Director of the Project 2049 Institute. In addition to Taiwan issues, Mark's research focus includes Chinese People's Liberation Army (PLA) Rocket Force and Strategic Support Force, defense industry, military and political leadership, and cross-Strait relations. Mark has served in a variety of military and private sector positions. A 20 year U.S. Air Force veteran, he served in intelligence, planning, and policy positions. From 1984-1989, he was assigned to the Philippines and West Berlin. After graduate school and Chinese language training, Mark served as assistant air attaché at the U.S. Embassy in Beijing from 1992 to 1995. From 1995 to May 1997, he was assigned as a strategic planner within the U.S. Air Force Plans and Operations Directorate. Between 1997 and 2004, he served as senior country director for China and Taiwan in the Office of the Secretary of Defense. After retiring from military service, he worked in the private sector on Taiwan for more than three years. Mark joined Project 2049 in 2008. He holds a BA from Texas A&M University and graduate degrees in international relations and Asian studies from Boston University and the Naval Postgraduate School. He has working proficiency in Mandarin Chinese.