Sammy Davis Jr: The Untold Story of the Great Entertainer

NEW YORK – Sammy Davis Jr., the late legendary multi – talented black singer, dancer, actor and comedian, whose life and career have been profiled on the currently playing wonderful PBS documentary, “Sammy Davis Jr.: I’ve Got To Be Me”, was reportedly once on a golf course with his close friend, the late iconic comedian Jack Benny, when someone asked him what his golf handicap was. “Handicap”, he responded, “Talk about handicap. I’m a one-eyed Negro Jew.”

That comment – which he recounted in his auto-biography and was repeated in countless articles written about him during his life which began in 1925, and even continued to be told by entertainment writers after his death in 1990 – was not intended to be a joke. Davis was, in fact, a Negro (a term, of course, that has since been replaced by the words black man) – Jew with one eye. And his disability, religion and race had become intertwined through a strange series of events, some of which are highlighted in the documentary.

Davis, whose mother was a Catholic and whose father was a Baptist, had back in 1953 developed a close friendship with the comedian and TV host Eddie Cantor. Cantor, who was Jewish, had given a mezuzah – a small capsule containing a brief Hebrew blessing traditionally affixed to door posts in the homes of observant families of the Jewish faith – as a special gift to Davis.

Rather than placing his mezuzah in his own home, however, Davis wore it around his neck every day, telling friends that he believed it would provide him with good luck. There was one day, and the only day- November 19h, 1954 – that Davis forgot to wear Cantor’s gift. In the late evening of that life- altering day, as Davis was driving to his Los Angeles home after performing in an evening show in Las Vegas, he became involved in a horrific automobile accident, tragically resulting in the loss of his left eye.

The paradoxes surrounding the accident, as Davis later recalled, soon spawned his desire to study the Jewish religion and learn about the history of the Jewish people, whom he viewed as experiencing throughout the centuries prejudice and hatred similar to what black people had also long endured. So, it could have been almost literally said that upon his formal conversion to his new religion in early 1960 that Davis had become a true “Negro-Jew”.

But it was the “Negro” half of Davis rather than the “Jewish” part that was to make him the victim of intense racial hatred. As could be readily inferred from the documentary, when Davis in a Jewish ceremony married May Britt, a white, Swedish-born actress, on November 13, 1960, it was his race not his religion which stirred the hatred of many Americans against him.

As that wedding day drew close, Davis received numerous death threats, requiring him to hire round the clock armed security guards to protect him and Britt. Those death threats were to continue for years after the couple married. It might seem hard to believe in today’s America, but at that time, hatred towards inter- racial couples reflected the biases of many Americans.

A look at the history of America in the middle of the 20th Century tells the disconcerting story. On the day Davis and Britt were married, 23 states still held “anti- miscegenation laws” in their penal codes. And Davis’ own California had repealed its own hideous laws barring inter-racial marriage only 12 years earlier. While the United States Supreme Court declared all such vile laws unconstitutional in 1967, such bigotry did in fact, actually mirror the sentiments of a wide majority of citizens throughout the nation for many years. A national poll taken in 1958, for example, found that a mere 4% of Americans approved of marriages between blacks and whites.

Davis, though, seemed to be more upset by how his marriage to May received the scorn of then President-elect John F. Kennedy than he was by the death threats or the prejudices held by many Americans. As presented in the documentary, Davis along with his friend the inimitable singer Frank Sinatra and several other major Hollywood stars of that time had worked on behalf of JFK during the 1960 presidential campaign, and Davis had been scheduled to perform at Kennedy’s January 20h, 1961 Inauguration.

However, Kennedy, later said by some historians to be concerned about the controversy surrounding the then recent Davis-Britt marriage, withdrew his invitation for the entertainer to perform; worse still, he even went so far as to dis-invite Davis from attending it. It was a hurt and disappointment that several of Davis’ friends and family members were to later say would remain with him throughout the rest of his life.

But it did not make Davis lose his sense of love of humanity or his ability to forgive. Sounds presumptuous? Allow me to describe a long past personal experience to explain that claim: First fast forward to an August day in mid- northern NYS about ten years after the JFK incident: While off from college in the summer of 1970, I worked as a lifeguard in Hotel Brickman, located in the rural area known as the Catskills. Brickman was but one of of a couple of dozens of Catskill hotels, which included the Grossinger’s, The Concord and the Brown’s. Enjoying their heydays in the 1950’s and 1960’s, these hotels, now defunct, offered their guests, among many other amenities, comedy shows performed by an impressive list of the best- known entertainers of the time.

If you are under 40 and don’t know who they were, just ask your parents or grandparents to tell you about Milton Berle, Henny Youngman, Jerry Lewis, Mel Brooks, Danny Kaye, Shecky Greene and Jackie Mason. They, and a few dozen other top show people, regularly performed in many of the Catskill Hotels during that time. Of all that long list of talents, Sammy Davis Jr. was the top billing. And one of the hotels in which Davis sometimes performed was Hotel Brickman, a fact I learned one August day during a pleasant after work discussion with the hotel’s captain of the bellhops.

The man, a tallish, broad- shouldered, middle aged guy who had worked in the hotel for more than 20 years, was known to have met many of the entertainers who performed at the hotel during his time there. The “Captain”, who seemed to like me, said that he had a personal story to tell about Sammy Davis, which he predicted would make a great impression on me.

It did, and over the years my brain has relived it countless times. I have also told it many times to friends, acquaintances and even students in my graduate English classes. As a result, I believe that (almost) every one of the words of the tale the captain of the bellhops of the Hotel Brickman told me on a long-gone hot summer early evening remains well stored in my memory bank. And I can still recall his words as follows:

It was some time in the summer of 1962 that Davis, who was with his wife May, had come to the hotel to perform one weekend. After the couple left the limousine that had transported them to the hotel, their luggage was taken to their suite by one of the hotel’s bellhops. As I was to later learn, it turned out to be the wrong guy for the job. He was an ignorant, white racist who while escorting Sammy and May to their room, made several nasty remarks regarding the difference in the color of their skins.

Sammy, as you would expect, was outraged. Shortly later, he found the manager of Brickman to complain about the ugly verbal abuse he and his wife had just suffered. The racist bellhop was fired that same day. The story, though, did not end there.

Two summers later Sammy, again accompanied by his wife, returned to perform at the hotel. While standing in the lobby waiting for their luggage to be taken to their room, the couple was approached by a young guy, who himself worked as a bell hop at the hotel. Given what had happened two years before, the guy might have been taking a chance of losing his own job, but yet, he identified himself as a friend of that racist bellhop who had insulted Sammy and May two years before.

I, as the bell hop captain assigned to the lobby, witnessed all this. So I was clearly able to see the look of annoyance on Sammy’s face. May also looked upset. And as you might expect, the friend of the racist bellhop had enough decency and common sense to begin by telling Sammy and his wife how disgusted he was by how his then co-worker had spoken to them the last time they were at the hotel. However, he then added that his admittedly justifiably fired pal has a wife and four young children, had been unemployed since his firing and his house was currently going through foreclosure.

What I then saw and heard I will remember until the day I die: Sammy asked the guy how much money the friend whom he had come to plead for would have earned the past two years. The guy told him 12,000 dollars. Sammy then asked him to write on a piece of paper his friend’s full name. Sammy then opened his wallet, took out a check and filled it out. He handed the young bell hop, the check-made out, I later learned for 12,000 dollars – and told him to deliver it to his financially struggling buddy. Sammy then added that he was going to see the owner of the hotel to tell him to rehire his one-time antagonist. His final words to the young bellhop who had the courage to come to speak to him that day was ‘tell your friend to report to work tomorrow. I promise there will be a job waiting for him.’

To paraphrase the title of a great old song, “What the World needs now is another Sammy Davis”. 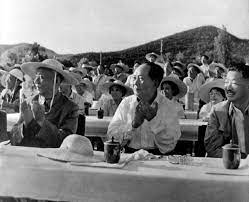