Why President Trump Should Break the !!!One China!!! Spell

Why President Trump Should Break the !!!One China!!! Spell

Standing up for Taiwan, a key democratic ally, will benefit American interests in the long run.

During China!!!s recent ~Two sessions,~ in which some 5,000 governing elites gathered in Beijing to rubber-stamp the agenda of the Chinese Communist Party (CCP), Wang Hongguang, a retired Chinese general, publicly dared the United States to deploy a Terminal High Altitude Area Defense system (THAAD) in Taiwan. He boasted that the deployment would provide the Chinese People!!!s Liberation Army (PLA) with an excuse to use force to ~liberate~ the island.

Wang had earlier dared the U.S. to deploy Marines to guard the site of the American Institute in Taiwan, the de facto American Embassy on the island. He has threatened to use harsh countermeasures to retaliate against the government of Tsai Ing-wen, even though she had nothing to do with the decision to deploy the Marines in Taipei.

Wang!!!s threats came at the time of a major shift in President Trump!!!s tone and stance toward China. He has recently retreated from his strong rhetoric against the Chinese Communist regime and from his pre-inauguration position that the U.S doesn!!!t ~have to be bound~ by the so-called One China policy.

Trump!!!s flip-flop on the One China policy has caused unnecessary confusion in Asia. It has weakened the administration!!!s moral position and credibility and has arguably given Beijing the upper hand in the cross-Strait relationship.

In my view, the One China policy is a trap that has been plied by Beijing to legitimize and strengthen the CCP dictatorship, squeeze Taiwan!!!s international space, and force Taiwan to kneel at Beijing!!!s feet. President Trump should take a fresh look at the One China policy, and honor the ~right~ China.

In the late 1960s and early !!!70s, President Nixon was anxious to get out of Vietnam and counter the Soviets!!! global expansion during the Cold War. Henry Kissinger persuaded Nixon to betray and abandon the ROC – America!!!s long loyal ally in Asia – by recognizing the PRC government as the sole legitimate government of China. Thus America willingly accepted the One China policy. In 1979, the U.S. Congress passed the Taiwan Relations Act to maintain unofficial relations with the ROC. Later, President Reagan gave the ~Six Assurances~ for the ROC!!!s security, all of which were designed to keep the cross-Strait status quo.

Most American experts on China argue that this policy has worked well because it has helped maintain the regional peace. But I believe that the One China policy is seriously flawed and should be reviewed and modified. This policy has helped Beijing fundamentally shift the power balance in its favor, resulting in the creation of an authoritarian behemoth that impinges on the right of the Taiwanese people to self-determination and that poses a severe threat to both regional and global peace. Beijing has demanded the recognition of One China as a prerequisite for entering into diplomatic relations and joining international organizations, and it has successfully excluded Taiwan from the current international system.

This is unfair to the people of Taiwan. The ROC has always been an outstanding member of the international community. It made enormous sacrifices during World War II and great contributions to the Asian economic take-off. Even in the wake of America!!!s abandonment of Taiwan and Beijing!!!s relentless pressure, the ROC has peacefully transformed itself into a democratic country and become a beacon of freedom in Asia.

By contrast, since the Communist regime in Beijing first entered the international community under the One China policy, it has taken advantage of American markets, capital, and technology to rise to its position as an evil empire. Instead of respecting international law and order, as Kissinger assured it would, Beijing has sought to reshape the international order in ways that ensure the PRC!!!s dominance. The CCP brutally cracks down on any dissent by its citizens and also undermines international peace and stability by bullying countries in the region, including Taiwan. Worse, the regime even boasts about its capability to nuke America.

Standing up for democracy has long been a core element of American foreign policy, not only because the U.S. has a moral obligation to support democratic countries who share the same values but also because such support will make America and the world more secure.

The One China policy forced on Washington by Beijing has not been adjusted to take into account the ROC!!!s democratic governance. At the same time, an underlying assumption of the policy, namely, political reform and peaceful transition, has not materialized. In short, the policy is out of date and not in the long-term best interest of the U.S., and it should be updated accordingly.

America!!!s difficulty in refining the ambiguous One China policy has over time allowed Beijing to hijack and distort the term. For example, the U.S. only acknowledged Beijing!!!s One China position in the 1972 first joint communiqué of the PRC and the U.S., without expressly accepting it. But in the 1979 joint communiqué of the PRC and the U.S., the U.S. recognized Beijing as the sole legitimate government of China, and further, in these nations!!! third joint communiqué, in 1982, the U.S. was pushed to admit that it had no intention of pursuing a policy of ~two Chinas~ or ~one China, one Taiwan.~ President Clinton went to so far as to state that the U.S. would not support Taiwan!!!s independence. Presidents Bush and Obama also took a similar position. Today, the PRC and America have, in practice, recognized of the One China policy as legitimate. Step by step, Beijing has fully cast its One China spell on the U.S.

The grave danger caused by the United States!!! ambiguous, often self-contradictory statements and practice regarding One China is that they fail to draw a red line to guarantee Taiwan!!!s security in a legally binding agreement; this could offer an opportunity for Beijing to invade the island in the future. The U.S. did not secure Beijing!!!s commitment to abandon the use of force against Taiwan. In 2005, the Communist regime passed the so-called anti-secession law, explicitly stipulating that it will use force against Taiwan!!!s ~independence provocation.~ But that term!!!s meaning remains totally subject to the regime!!!s interpretation. Today, more than a thousand missiles are pointing at the island across the Taiwan Strait, but Beijing considers it a serious ~provocation~ if the ROC even mentions THAAD as a possible means of defending itself from a potential attack.

Even if the One China policy was justified 40 years ago, the geopolitical conditions calling for it no longer exist: The Soviet Union collapsed long ago, and the new Moscow has formed a strategic alliance with Beijing; Vietnam now sides with the U.S. in opposing China!!!s aggressive behavior in the South China Sea, and the PRC has become a formidable power challenging the America!!!s global leadership.

I believe the best way to break the One China spell is for the U.S. to refuse to accept Beijing!!!s sovereignty over Taiwan and to formally recognize the ROC as a legitimate government by signing an agreement with it. The agreement should incorporate the updated and expanded components in the Taiwan Relations Act and President Reagan!!!s ~Six Assurances~ to reflect Taiwan!!!s democracy and America!!!s commitment to its defense. Such strategic and moral clarity will deter Beijing!!!s aggression and achieve peace through strength in the region.

To conclude, I want to quote a fellow citizen of China: ~As a mainland shitzen (sh** + citizen), I do not give a sh** who is in power, but I am happy to see Taiwan not be swallowed by the CCP, because it is far better to let some people live free than have us all suffer under slavery.~

I hope President Trump has this Chinese shitzen!!!s political wisdom to break the One China spell, which would help him make America greater.

– Jianli Yang is the founder and president of Initiatives for China / Citizen Power for China and a former political prisoner of the Chinese government. 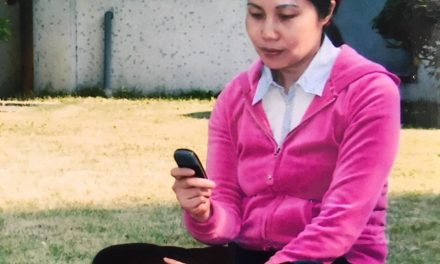