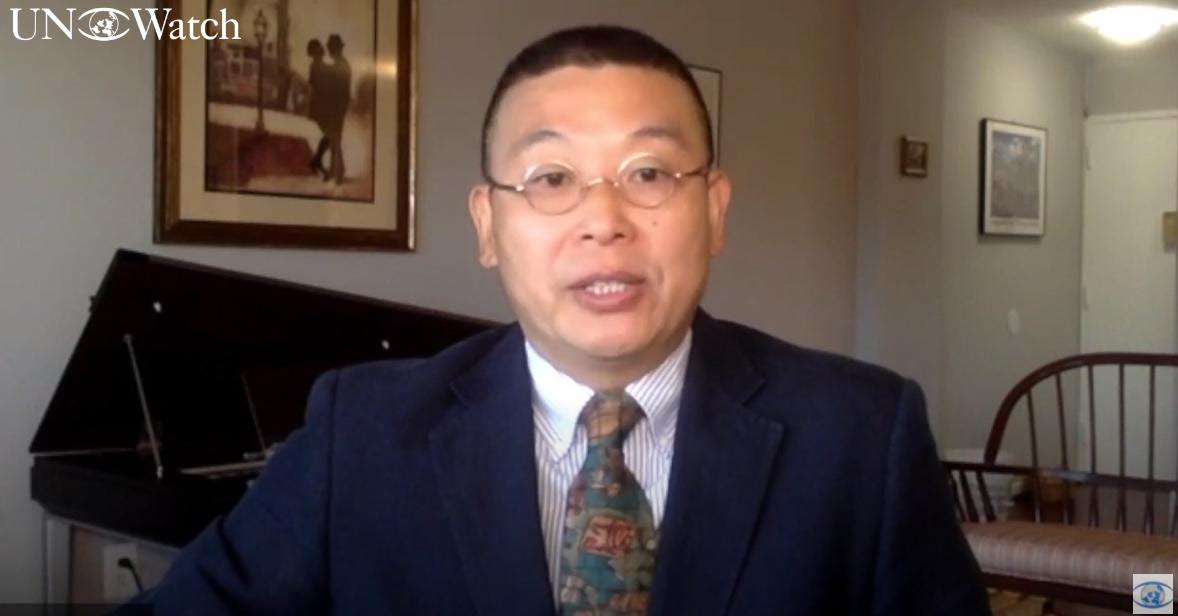 (Speaking at UN Watch’s press conference today concerning next week’s elections to the 47-nation U.N. Human Rights Council, Chinese rights activist Yang Jianli urged countries not to elect China. See his remarks below. UN Watch published a detailed report on the elections which examines the pledges and human rights record of each country running. Click here for the report.)

On October 13, the UN General Assembly will be electing new members for the Human Rights Council’s 2021-2023 term, and China is running for the fifth time. During the one-year period of time when China was waiting to be eligible again to run for the Council’s membership, the Chinese government—under the increasingly draconian rule of Xi Jinping—has escalated human rights repression across the board, especially, with its crackdown on critics of the government’s handling of COVID-19 pandemic, persecution of ethnic religious minorities in Xinjiang, Tibet and Inner Mongolia, and annihilation of civil and political liberties in Hong Kong.

Nothing can be further from the truth than China’s voluntary pledge for its current bid for Human Rights Council membership. It claims, for example, that “since the outbreak of COVID-19 the Chinese Government has been giving top-most priority to people’s lives and health” and that “China has acted with openness, transparency and responsibility, updating COVID-19 information in a most timely fashion.”

In July of this year our organization, Citizen Power Initiatives for China, issued a comprehensive research report entitled “Examining China’s Response to the Covid-19 Outbreak.” Based on meticulous analysis of data, much of it directly from sources in China, the report establishes a day-by-day, objective record of the Chinese government’s response to the virus outbreak, especially in the critical month between December 26, 2019 and January 25, 2020. The report concludes among other things:

The Covid-19 epidemic could have been stopped in its early state.

The Chinese Government deliberately suppressed information about the source and extent of the outbreak and the overall threat of the pandemic.

This is just one example.

By any standard, China has grossly violated the Council’s founding principles and does not measure up to its membership criteria. Any statement suggesting otherwise is as cynical as ridicules.

We urge UN member states, especially the democracies, to seriously consider China’s human rights record. If this were an election for a “Human Rights Abusers Council” it would be more than proper to vote for China as it leads the entire world in violating human rights.

But sadly, I find it imperative and necessary to remind democratic governments around the world that this is an election for the UN Human Rights Council and not the UN Human Rights Abusers Council. The only choice that commensurates with the values you claim to uphold is to vote “No” on China.

Although the vote next week will be cast in a secret ballot, I urge the people of democracies to ask how your governments vote. You and we, the victims of the Chinese government abuses and China’s human rights defenders, deserve to know.